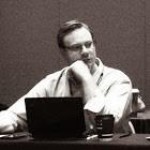 I started as an engineer at Duke in 1999. I decided I hated math, so I fled to the Department of Religion, where I found I was fascinated by sacred architecture, religious theory, and sacred space. (Not to mention religion and film, literature, music, and most other forms of popular culture.) I retained, oddly enough, quite a bit of the spatial interest that had led me to engineering in the first place. Even as I abandoned the math (and chemistry and calculus), I actually tried to keep some of the coding and computer science. Too bad I'm 10+ years out of date now.

I continued these interests in master's work at Miami University--focusing on Buddhist temples in India, Burma, Nepal, and Thailand, which I had learned about during a fall studying abroad in 2001. I also gained a love of travel and photography during this period. I can hardly go anywhere without some kind of camera now, and I'm always trying to plan the next exotic getaway.

As a graduate TA at Miami I found that I may love teaching even more than learning about religion. For me it was easier to get lost planning lessons and class exercises than it was getting lost in the archives. You can't always do field work, right? So I pressed on, moving to Santa Barbara to continue Ph.D. work at UCSB, specializing in 20th century American Religious History. I needed a stronger theoretical background for my work with sacred space, and the interdisciplinary approach of their Department of Religious Studies was the right kind of crucible to productively temper my enthusiasm for teaching with a healthy dose of research and method.

Now I'm about 6 months from finishing my dissertation on the spatial strategies that evangelical spiritual warriors us to fight cosmic battles against the forces of Satan. These strategies don't fit well within existing sacred space models, so my work tries to explain why there is a gap between practice and theory and what might be needed to bridge it.